« Back to the sailing areas

On the northeast side of Meganissi lies the bay of Katomeri, Port Atheni. The entrance to the bay can be identified by a small lighthouse. Directly behind it is the entrance to Atheni bay. A picturesque bay with many small coves, where you can easily anchor in calm weather. However, make sure you pull a line to the shore. Do not attach the line to the rock, but rather to a large tree. You can take a beautiful walk of about 30 minutes to the village of Katomeri. The road is somewhat steep, but it´s worth it. The older female residents of the village often go dressed in traditional clothes. Weaving and embroidery are also quite common here.

Sailing towards this area

Just beyond the bay of Kapali and Abelike lies Katomeri Bay/Port Atheni. Beware of the shallows near the reefs and make sure you sail around the islands of Makro and Mikro Nisopoulo. A shoal (Ak. Elia) lies on the eastern tip of the bay. 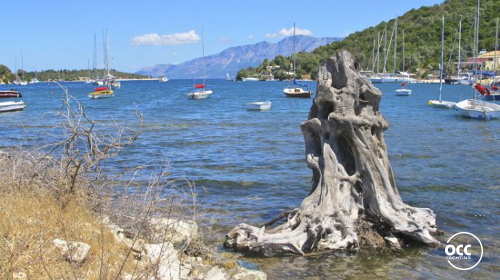 At the end of the easternmost passage you will see a restaurant with jetty on the east side. You can moor here. A little bit further is the fishing wharf, which is partially used by the local fishermen. You can moor here as long as there is space. There are also various anchorage areas. The depth of the bay is approx. 6 metres. .

Would you like to book a sailing holiday in Corfu or Lefkas online?